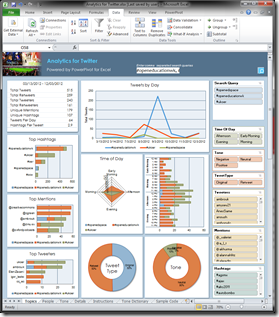 Recently I wanted to import some linked data into Excel 2010 to experiment with the free PowerPivot plugin. I came across PowerPivot via a post by Ann Smarty HOW TO: Search Twitter from Google Spreadsheets and Excel and it looked like potentially a good way to quickly dashboard a spreadsheet. The ‘Analytics for Twitter’ template looks interesting and might be useful for Windows users who have a copy of Excel 2010.

I should probably have immediately walked away given that PowerPivot is so platform dependant, but briefly persevered giving up completely when I couldn’t find an easy way to get a live data feed from a SPARQL query. I wanted to go down the SPARQL route because consuming this in a Google Spreadsheet as part of the OER Visualisation project worked well. I was hoping that I could take one of my original queries, passed in a SPARQL proxy  and use the Excel Data > From Web.

Here are the problems I encountered:

At this point I used a cell reference starting at row 2 to insert a pivot report, which worked, but found the pivot tools didn’t fit my needs so decided to draw a line under the investigation.

If you search for ‘importing sparql data excel’ you’ll find other peoples woes and some other convoluted workarounds but I’m giving up for now. I may revisit PowerPivot at a later a date.

Previous Post: Good news: Got a full-time job at JISC CETIS
Next Post: Tracking activity: Diigo site bookmark activity data in a Google Spreadsheet (who is saving your stuff)