I suppose I should start with the why you would want to do this. Every time I join a Blackboard Collaborate session it’s like stepping back in time. Beside the appearance the technology in Collaborate is increasingly out of step with current trends. The software is built on Java, which is claimed to be in over 3 billion devices. Unfortunately for a number of users those 3 billion devices often doesn’t include the computer on their desk. Here is where the problems start as without enough permissions you won’t be able to install Java. To Blackboard’s credit they have spent time developing mobile apps not everyone is going to be able to use these either.

Aware of these barriers for ocTEL we decided to investigate streaming Collaborate session to YouTube. The main advantage for use in getting this to work is that as well as being able to give an alternative means to watch the session we immediately have a recording to share for those who missed it. You can see the results in this session from week 3 of ocTEL.

In this post I’ll outline the technique we use, which can also be more generally applied to any desktop application. It’s also worth highlighting that this is just one of many ways of streaming your desktop and you could achieve similar results using a Google Hangout On Air or the free ‘Wirecast for YouTube’ software Mac|Windows. The reason we didn’t go down that route was we wanted more control over the part of the screen being shared and we didn’t want to have to buy a Wirecast Pro license.

This package, as it’s name indicates, is open source. Currently it’s Windows only and can be downloaded here (a multiplatform studio version is on the way). The main feature of OBS is to mix and stream different video/audio sources. The feature we found particularly useful was selecting a region of the desktop. Here are the steps we use to stream an ocTEL Collaborate you YouTube.

To stream the event we need something to stream to. There is various guidance on the setup and requirements of a YouTube streamed event. The important step is to make sure you specify an ‘Other encoder’ to get a Stream Name/Key to enter in OBS later. 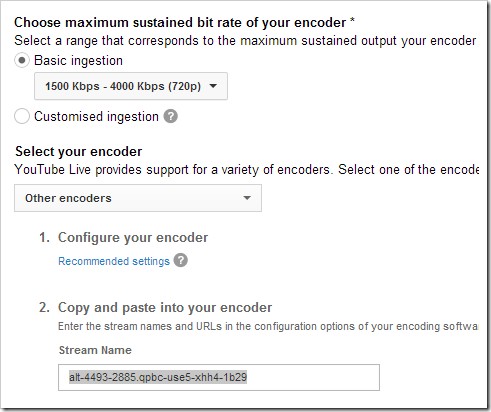 Before you stream you need to join the Blackboard Collaborate session as usual. In ocTEL we need a generic name (A_L_T). As we are streaming the computers desktop and wanted to avoid any other notifications or sounds for ocTEL we did this on a dedicated laptop with the OBS software installed. For similar reasons we also turned off all Collaborate audible and visual notifications from the Tools > Preferences options. Once you are happy with your Collaborate layout/settings we turn our attention to Open Broadcaster Software (OBS).

First you need to configure the connection to YouTube this is done in the Settings > Settings menu under Broadcast Settings. In here you want to make sure:

Further down this screen you might want to check the ‘save to disk’ option if you would like a backup of the recording … and your computer can cope.

Whilst here you might want to switch to ‘audio’ from the left hand menu and set:

Next we want to setup a scene. In the main OBS window right-click anywhere in the Scenes list in the bottom left of the window and ‘Add Scene’

We now need to add some sources to our scene by doing a similar right-ckick action in the Sources list. For ocTEL we did a ‘Window Capture’ which lets you select the Collaborate window. At this point you could just click okay and import the entire Collaborate window but if you choose this option you might be better just using the free ‘Wirecast for YouTube’ mentioned in the intro. Instead for ocTEL we wanted just to show the presentation area and speak if they were using a webcam so checked the ‘Sub-Region’ box and click ‘Select Region’.

Tip: When selecting the sub region you can only resize the area rather than using a combination of resize and pan. To do this move you cursor to the edge of the region until it changes to resize arrows.

When you are finished press enter or esc, or click outside the region and click Ok in the main window dialog. Repeat the processes of adding a new source if you want to capture different part of the window.

Once you have your sources right clicking on them in the source list gives you some basic layout and position control. If you would like to fine tune these click ‘Preview Stream’ which lets you click the ‘Edit Scene’ button. With this on when you click on each of you sources resizeable/positionable boxes appear around you sources in the preview window.

Tip: You can turn sources on/off even during broadcast my clicking the checkbox next to them. You can also use the ‘Edit Scene’ button to enable/disable scene editing during broadcast.

At this point you might want to File > Save your settings

When you are ready to go live click the ‘Start Streaming’ button in OBS and visit you YouTube event ‘Live Control Room’ to check data is coming through and ‘Preview’ it. Finally when you are ready you can switch the from Preview to Live.

Tip: Because we wanted to make sure the session was streaming during broadcast we left some dead air at the beginning and end. After the event has finished, but not immediately available, you can visit the video on it’s watch page and click the ‘Enhancements’ button to ‘Trim’ the clip.

And that’s it. This technique has it’s limitations in that, for ocTEL anyway, we did not broadcast or make the chat available, but it’s interesting to see the YouTube clips of the sessions are being watched and providing a jumping off point for our other channel content.

If you can think of any improvements or other ways of doing this let us know.